The land of gold and consciousness

On today's edition of #56DaysofAfrica, we will be highlighting the first African nation to gain independence, Ghana.

The name Ghana means “Warrior King” in the Soninke language and harks back to the days of the Ghana Empire between the ninth and 13th centuries. Initially ruled by Africans, Ghana was occupied by Britain renamed Ghana to the Gold Coast because the Ghana Empire had vast quantities of gold and salt. These strongholds served as fortified trading posts offering protection from other foreign settlers and threats from the African population.

The colony’s drive for independence was led by nationalist and Pan-African leader Kwame Nkrumah, who viewed Ghana’s sovereignty as being important not only for the Ghanaian people but for all of Africa, saying “Our independence is meaningless unless it is linked up with the total liberation of the African continent.”

Kwame promoted Pan-Africanism, a movement for cooperation between all people of African descent and for the political union of an independent Africa. Nkrumah built a strong central government and attempted to unify the country politically and to muster all its resources for rapid economic development.

Ghana gaining independence in West Africa from Britain in 1957, became the first sub-Saharan nation to break free from colonial rule. As a proponent of Pan-Africanism, he sought the liberation of the entire continent from colonial rule, offered generous assistance to other African nationalists.

With his mentor and political adviser, Trinidadian Pan-Africanist George Padmore, Kwame crafted an ideology based on black nationalism, pan-Africanism, Marxism, nonviolence and “positive non-alignment” or “positive neutrality”. After 1960 the ideology would be called Nkrumaism. Nkrumaism called for the liberation of the continent through mass nationalist movements without reference to ethnicities, tribes and religions, and for unity of the newly liberated nations under one flag. It also called for the development of the continent through a socialist planned economy.

Unity and the development of the continent has been Mawuli Kwami Ekuadzi, Africa Matters 2019 Ambassador continued focus throughout the course of his ambassadorship. Check out his webinar on Slavery and Africa - The Past, Present and Future where he discusses the history of Ghana, the challenges they face today and suggestions on how Africa could come together to strengthen itself and its people.

The capital of Ghana, Accra serves as the commercial and educational centre of the country. The “Garden City of West Africa,” Kumasi is another prominent commercial centre located in south-central and is the second largest city in Ghana.

Ghanaians speak over 40 languages throughout its 10 regions. English is the official language, but most people speak several languages as well. Ghana is Africa's largest gold producer and second to Côte d'Ivoire in the production of cocoa beans in the world.

Ghanaians are very traditional and celebrate a variety of local festivals throughout the year, such as the Bakatue festival in July which marks the new fishing season and the spring Homowo festival which asks for good rains.

Ghanaian cuisine is characterized by its extreme diversity and style. Most Ghanaian dishes are served with starch and tubers which are boiled, pounded and rolled into balls known as “fufu” and '"banku" These are often served in a soup or stew, or with palm oil/peanut sauce. Some of the most traditional Ghanaian foods are Apapransa and Ampesi. Apapransa is a local delicacy palm nut and cornmeal soup cooked together to result in a solid chunk piece. Cooked crabs and kidney beans are used for garnishing.

Ampesi is a platter consisting of cassava, cocoyam, yam, plantain, and potatoes, all boiled. For its accompaniments, locals go for either tomatoes and fish stew or kontomire stew. Banku, however is a cassava dough and fermented corn, amalgamated along with salt and water for having a dough-like consistency.

Ghana has a rich cultural heritage and plenty of landmarks that are worth a visit. These range from monuments, waterfalls, beaches, forests and many more. There are important castles and fortresses within Ghana. The most noteworthy of these landmarks include the Elmina Castle, Fort Prinsensten and the Osu Castle (Fort Christiansborg). 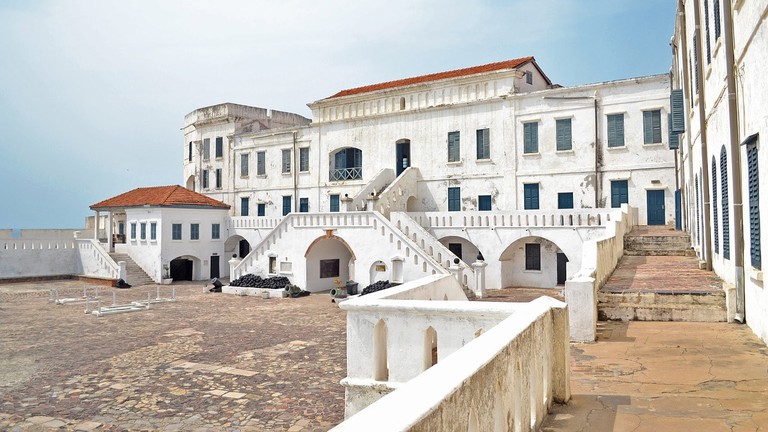 Cape Coast Castle is one of about forty "slave castles", or large commercial forts, built on the Gold Coast of West Africa by European traders. It was originally a Portuguese "feitoria" or trading post, established in 1555. The expansive building is lined with cannons and lightless dungeons. These dungeons, called “slave holes” by the British, had essentially no ventilation nor windows, with 200 slaves, separated by gender crammed in one room.

To highlight some of Ghana's environmental hot spots, Kakum National Park is a sight to see. Kakum is a rainforest located in the coastal environs of the Central Region. One of the highlights of any visit to Kakum, is a stroll on the Canopy Walkway that is built 30 meters above ground, crosses several bridges and is over 350 meters in length. The canopy walkway offers a unique viewing perspective of the wildlife and unique plants of the forest. 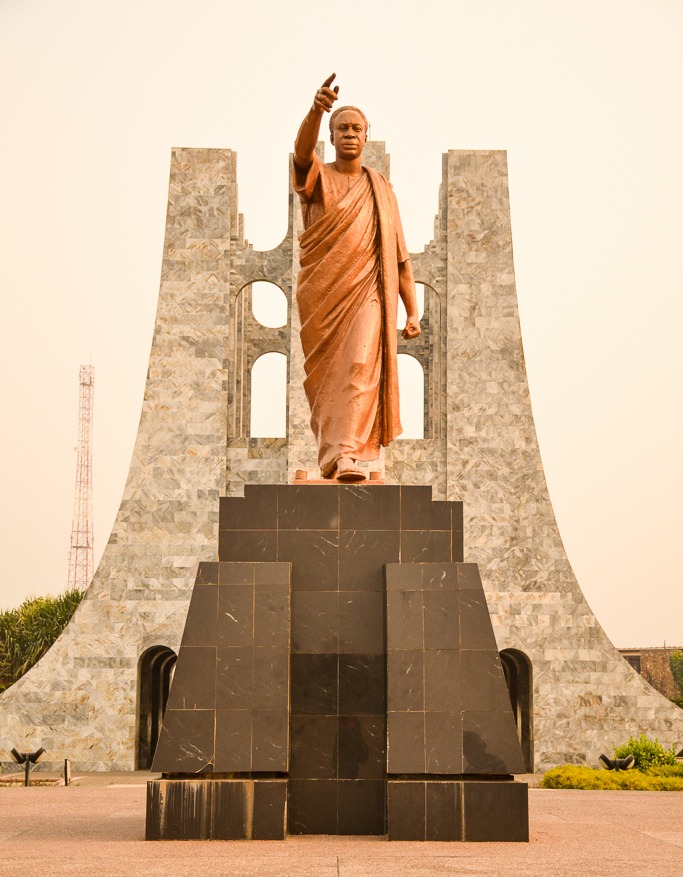 Some of the most sought out historical centres are the Kwame Nkrumah Memorial Park & Mausoleum, Black Star Square and W.E.B. DuBois Centre in Accra.

Kwame Nkrumah Memorial Park & Mausoleum is the final resting place of Nkrumah and his wife, Fathia Nkrumah. The park consists of five acres of land and holds a museum tracing Nkrumah’s life, displaying items from his childhood, through his teenage years to his adult life. Black Star Square, also known as Independence Square, which is located near the mausoleum and is now the site for all the major military and civic parades in the Accra.

The Dubois Centre for PanAfrican Culture is the former home turned into a research facility of Pan-Africanist Dr. W.E.B. DuBois. Dr. DuBois was a famous African-American scholar who came to Ghana to live in the newly independent nation. Today, the cultural centre features exhibits on his work and a library along with his tomb and that of his wife.

The "The land of gold and consciousness " has for the past 60 years advocated for the development and empowerment of Africa, Africans and those in the diaspora. With a rich and diverse culture, Ghana thrives in music, dance and many others. We cannot wait to continue to share more information about Ghana with you all in the coming days.

Be sure to follow us on Instagram and Facebook to find out more information about Ghana. Stay tuned for the next #56DaysofAfrica country highlight next Monday!